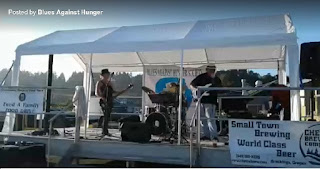 Brookings Harbor in Brookings Oregon at the Saturday Market sponsored by Chetco Brewing. It was a pleasant day and with plenty of time to browse the vendors, including Smokey that specialized in leather belts. It also provided enough time to enjoy a couple Chetco Brews while listening to solo guitarist Steven, who played before us.

We were very excited to have TIM Bonow, join us for the second show, along with harmonica player Robert from Crescent City. Said he had so much fun jamming with us, he wanted to do it
again. Even talked about joining us again down the road. This was the first time that the only local jammers to join us were drummers. I believe we had an additional 3 drummers join during the show; John, Linda Lou, and Stewart. Stewart owns an RV and is considering joining us on the road for a few gigs. During our last break, another band got up and played 3 songs with our gear, it was cool to hear how the same instruments sounded with other musicians. They rocked it, they are called "Caucasians in Crisis" and the guitarist-singer Mark loaned us one of his powered speakers, which was great for the outdoor space.

The harbor parking lot was huge with ample area to park our rig. There is even a boat wash station which we were able to fill our fresh water tanks. The parking lot does not allow for overnight parking, however you can get temporary overnight permits from the Harbormaster. We were given pne by Chetco Brewing so that we could stay in the lot overnight. We even had the security check on us prior to going in for the night.

Thanks to Chetco Brewing, Cindy, Alex, and all their folks for being so welcoming and professional. AND thanks for the great beer. Also, Thanks to Hula Hula Hawaiian BBQ for the 1/2 off for musicians.

Today we're going to go join the members of Caucaseans in Crisis at the city park for a Beatles Tribute concert, then a gathering of musicians at one of their homes in the afternoon for beers and food. Sounds like another jam to me. We'll see and let you know later.
Email ThisBlogThis!Share to TwitterShare to FacebookShare to Pinterest
Labels: 2017 Tour, Brewers & Blues, Road Report.
Newer Post Older Post Home