Road Report - The Fall is Coming Quick in Colorado 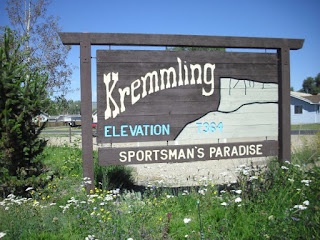 Colorado has been incredible, but it is really getting cold. The last few weeks have been incredible. We've found an incredible boondocking location. Helped launch a brand new brewery, and got frozen inside our RV. Why would anyone live any other way?

Once we finished our show at Lazy Boy Brewing in Everett Washington, we headed east through Washington and Idaho with some awesome shows and one our latest in terms of time in Idaho Falls...way past my bedtime ;-). Wyoming was open and beautiful before heading south into Colorado. We stopped at Rabbit Ears Pass above Steamboat Springs at about 9700 feet. It was breathtaking, literally. The first night I woke a couple times feeling as if I were having a panic attack. It turned out to be due to altitude sickness, which we quickly figured out. Then the next morning it started to snow! - We were out of there! We stopped in Steamboat Springs for a dispensary (medicinal) and a local taco shack called TACO CABO. The owner was actually from Jalisco Mexico, but he was cool and let us fill our fresh water tanks from his restaurant, but as a side note...it was the most expensive taco I've had in my life and it didn't come with rice, beans or nada. I think they were $5 each and I had...well that's not important. What's more important is how this week went down - it was all meant to be.

Last night we played a great show at The Grand Adventure Brewing Company, formerly the Mountain Bar & Grill. They were roasting a 4H pig named "Hotdog", which was purchased by the new brewery owner Rick. The event was going to be a big deal for him, the brewery and the town. This was Wednesday and the event would be next Saturday.

On Tuesday, we found from one of our favorite boondocking site "Campendium.com" about Williams Fork. We had two weeks between gigs, our longest time off since we left on June 14. We found the Williams Fork Reservoir near Kremmling Colorado. We could stay 14 days with no fees and they had a dump station and fully developed sites with fire pits, tables, bathrooms, and garbage pickup. There were two campgrounds, a West and an East, so we decided to spend a week at each (the pictures give you some idea of the area).

On this Wednesday we had gone into a local coffee shop called Big Shooters for coffee, tea and the use of their Wifi. When I went to order, I asked the 3 ladies at the counter if there was live music in town. The two ladies behind the counter said no, almost in stereo, but the lady customer in line beside me said, "yes, we just had two bands at the Road Kill Supper on Saturday". So, I continued the questioning and asked if there were any place with live bands we could go see. They all agreed no, but the lady beside me turned out to be Shelley from the Chamber of Commerce, said I could ask Tom, The Mayor sitting at the table behind me with about 4-6 other men chatting. I said thanks, strolled over to the table and was allowed to interrupt. I introduced myself and asked Tom the same question I asked the ladies. He told me "unfortunately no". So, I asked if a city permit was needed to perform live music; it is very common almost everywhere. Again he replied, "No, not in our little town.". I asked, "then what business in town would be the best place for music?" and he said "go see Rick at the new brewery across the park from the coffee shop. This turned out to be one of the easiest gigs we ever got. Rick said yes within minutes. The next stop was the Chamber of Commerce office to see Shelly, which was literally across the park to from the brewery. Shelly gave us contacts including the phone number one of the drummers from the Road Kill Supper and then made a phone call and sent me over to the local newspaper office to get interviewed, the newspaper office was also at the park. Bingo, bango, bongo! Within in an hour, we had a gig, city support, and newspaper coverage. Then they ran a story in the newspaper for the 2 weeks and put the show on the city billboard in front of the Chamber of Commerce office on the main street.  Our job was done.

We spent the next 10 days along the shore with our girls, playing music beside the fire and exploring the area. Last night was the show and it was packed. Hotdog the pig was good too. Our drummer was Don O'Hoto, a local grandfather, and a retired miner. He also invited a guitarist named Lee, that showed up without any instrument or anything. But after jamming a song or two with us on my second guitar decided to run home and get his own gear and jam some more. He said, "I only live 2 minutes away...I'll be right back".  We had a really great show.

Now, it is Sunday and we are trying to figure out what to do. It is getting colder and started dropping snow outside the window. This last Monday night we were frozen inside the RV. In the morning the front door was frozen shut. We had to wait until the sun came all the way up and Rachel chiseled from the inside with a knife. The days have been in the 60's and 70's, so not bad at all, very beautiful, but the mornings are getting damn cold. Now in the last few days, it has been raining and today they tell us it is going to snow this afternoon and tonight and we have a pass to cross.

This Friday we play in Edwards Colorado at Crazy Mountain Brewing Company near the ski resort Vail. The pass is nearly 11,000 feet, and have not been looking forward to going over it, especially if there is snow or ice. We found two alternate routes the locals gave us. The first is Trough Road, apparently, it cuts through the canyons without the huge pass, but the first 15 miles are not paved. But it will save us lots of time, avoid the pass and it supposed to be very very beautiful. But, then this morning while filling our propane tank, the service guy suggest Gore Pass, which he says "is hardly a pass" and only adds a few extra miles, and it's all paved. That's the way we're going of course. So, tonight we've decided to sit and assess the weather in the morning.

We have a few more days off, then we get busy again and will be heading south towards home. We have the show in Edwards of Friday, Oct 6, then in Denver at Crazy Mountain Brewing on Saturday, Oct 7, and then in Albuquerque on the Oct 12...its been 5 months, 7 states, over a hundred musicians, and thousands of meals and the journey continues.